A place to discuss Sears Tractors and related topics.

Posted this on another forum as well. Recently rebuilt my HH100 engine in my 1968 Suburban. After about 2 hours run time I started hearing a knocking sound I couldn't identify. Took it back to the small engine shop that did the reassembly & they removed the head to find a significant carbon build up. Valves, piston & rings seemed fine. Mechanic thinks carbon build up was due to the carb being set too rich. He said he had set it a little rich to allow it to run cooler. Plan is to clean off the carbon, set the carb a little leaner & see if the knock goes away.
Was at my dads yesterday & he said after WWII the hot rodders would shave off he heads to create more compression but that also led to other problems like over heating. I am wondering if the fact that both my head & my engine block were machined due to warpage, if I might have over heating problems in the future, especially since it obviously had problems in the past. Also wondering if I should use 2 head gaskets during reassembly to offset the metal lost during the machining process.
Any thoughts on these issues would be appreciated.

HI
I THINK YOU WERE NOT TURNING ENOUGH RPM'S WITH THE RICH MIXTURE, ENGINE NOT HEATING UP, THE TWO HEAD GASKET IDEA WOULD BE ONE WAY TO GET THE PISTON CLEAR OF THE HEAD, ALSO AS THE BEARINGS WEAR THE PISTON WILL MOVE UP AND MAKE CONTACT WITH THE HEAD, BUT FOR NOW LEAN IT DOWN A BIT, BURN ONLY PREMIUM ETANOL FREE GAS WITH MARVEL MYSTERY OIL AND ALL WILL BE WELL.
Have A Good One
Jimmy

Hi Jimmy, thanks for the response. Do you think the noise could be from the piston hitting the carbon build up on the head? I replaced the bearings when the rebuild was done so hopefully I won't be having them wear significantly anytime soon. Do you think I should try two gaskets or just try premium ethanol free gas with Marvel Mystery Oil? What does Marvel M.O. do?
Dan

Mechanic was preparing to reassemble head after decarboning (see earlier post Suburban 10 carbon build up). While moving the crankshaft he was able to recreate knocking and it is coming from the lower part of the engine. When moving the crankshaft back & forth at the end of the last stroke when the piston is at the top of the cylinder and both valves are open just a little you can hear the knocking sound from within the engine. Piston & valves seem tight. The noise is not apparent in any of the other strokes, the mechanic says could be the cam because of the position of the valves & piston when we hear the noise. He says only other thing he can think of would be the crankshaft but that was welded up & ground down to spec by the machine shop. He doesn't think it sounds like a connecting rod & the engine is still running strong. Plan now is to completely tear down engine & see what we find.
Again, any thoughts would be appreciated..

Oops, I was trying to start a new thread. Will try again

Was there a lot of exhaust smoking, and what color? I don't think a little over-rich could carbon up a rebuilt engine in two hours. I'd guess an oil blowby due to something about the ring installation or bore, like standard rings in an over-size cylinder or vice versa.

I'd want minimum piston to head clearance of .035". The engine originally had far more than that, so you should still be good, but you can check it.

Tore down the engine & found the crankshaft was out of round & the connecting surface of the rod was chewed up. I guess that explains the clunking sound & the oil getting dirty so fast. How this happened is a mystery to all. Machine shop agreed to rework the crankshaft & I had to buy a new rod. Got the crank back yesterday, took it to the small engine shop, mechanic said he didn't like the color of the bearings, they were purple/blue not shiney silver, had been affected by the heat. This saga just won't end! Back to the machine shop. He said he doubted there was enough heat generated in the process they use to damage the bearings but I told him I wanted new ones, I would pay. He offered to pay but I declined, just want this done!

I had a Tecumseh 10hp with a severe carbon problem once. It was knocking and banging before I took it apart and cleaned it up. The loose pieces on top of the piston were all there before it scraped them with a putty knife. 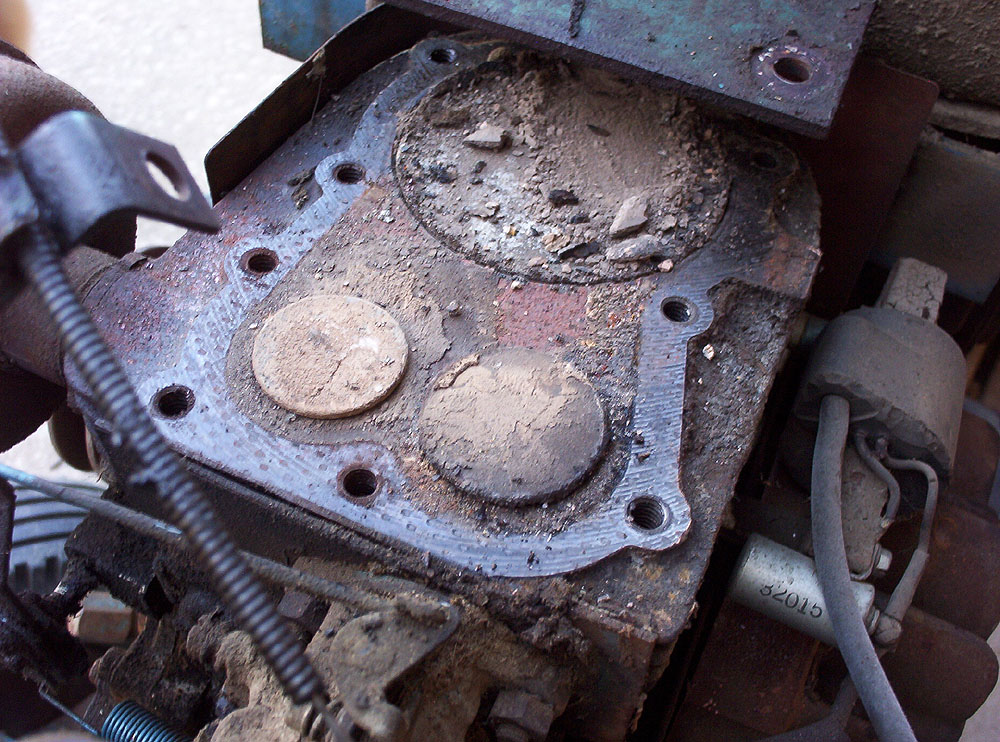